The Global Evolution of Industrial Relations. Events, Ideas and the IIRA 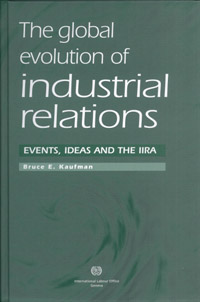 “This is the best work ever written on the historical development of industrial relations.”
Prof. Tadashi Hanami, Professor Emeritus, Sophia University, Tokyo, Japan

“.. .an indispensable source of knowledge for anyone interested in the field of industrial relations, in the work of the ILO and in the activities of the IIRA.”
Prof. Dr. Manfred Weiss, Johann Wolfgang Goethe University, Frankfurt, Germany

“Kaufman’s book is a tour de force. It is a thoughtful and analytical history of the evolution of international and comparative industrial relations as a field of study… It will be an extremely valuable resource as we take up the challenges facing our field today and tomorrow.”
Thomas A. Kochan, MIT Sloan School of Management, Institute for Work and Employment Research, USA

Essential reading for all those concerned with the history and practice of industrial relations, this landmark volume chronicles the evolution of the field to date. It focuses on the largely untold story of how the globalization of industrial relations took hold, and explores in depth the pivotal events, ideas and people behind it.

For the most part, the roots of industrial relations are found in North America and the United Kingdom, and this volume takes a substantive look at the theory and practice that developed in these regions before the Second World War. A comprehensive and informative account of events post-1945 is also provided, highlighting the four allimportant pillars that shaped industrial relations in this period: the International Labour Organization (ILO), the International Industrial Relations Association (IIRA), the leading role in industrial relations played by the United States following the Second World War, and the spread of industrialism, market economies, trade union movements and democratic forms of government to many non-Western nations.

Today the field of industrial relations faces significant challenges at both an intellectual and policy level, and in a number of countries it is in decline and even disarray. If present trends continue, important choices will have to be made to ensure brighter prospects. Drawing from the research and analysis of the field’s history across the globe, this volume proposes lessons and implications for industrial relations in the future